Launching a successful digital product takes a lot of effort. Working hard, however, does not ensure that users will adopt your product.

The truth is users may resign from your product because you haven’t tested the product before release.  If you skipped creating an advanced, fully functional prototype and decided to go with a low-fidelity one and then went into the development stage, there was no room for any reliable usability tests.

Only now do you realize that you spent countless hours building a product that is not as successful as you anticipated.

Let’s learn from this hypothetical mistake by taking a closer look at the importance of usability testing and why you need functional prototypes to get accurate results from your trials.

The odds of success are not in your favor. That’s not a pessimistic outlook. That’s just what the numbers say.

Only about 0.5% of apps succeed. Let that sink in. If you build 200 apps, the statistics say that only one of them will succeed. What happens to the rest of them?

You can’t deny the math, but you can test your products before committing to launch.

After this heavy dose of reality, you might wonder why user testing even matters. What’s the point?! One out of 200 apps turns out to be successful!

Fully functional prototypes give you perspective

Let’s put this into perspective so you can see the true benefits of working prototypes and user testing.

First, a lot of those apps are worthless. They don’t perform functions that anyone wants. If you have seen the second season of Silicon Valley, you probably remember the “Bro app.” All it does is send the word “bro” to other people who have the app. Silicon Valley did an excellent job skewering some of the insane trends in technology. With the Bro app, the show lampooned all of the meaningless products out there.

The internet has thousands upon thousands of Bro apps.

Second, a lot of companies don’t spend enough time developing and testing their apps. According to appinventiv, 24% of developers spend three months or less working on their products before launch. Some of those companies launched their apps within one month. Is it feasible to research the market, design your product, develop your product, test it for quality assurance, and launch within a month? That seems unlikely.

Third — and this brings us to the heart of the matter — very few designers have the benefit of user testing with fully functional prototypes with interactive features and real data.

If you casually say to someone, “I’m going to make an app that sends the word ‘Bro’ to people,” you’ll probably get some encouragement from well-meaning friends. You’ll get a much different response when you put the app in their hands and tell them how much it will cost to develop, launch, and market.

With functional prototypes, you gain a perspective that you rarely get from mockups that don’t do anything except sit on the page (or screen).

You’re a project manager with two designers and three developers on your team. Over one year, you can expect to pay your designers about $53,400 each and your developers about $114,300 each. Your small team costs $449,700 per year, plus benefits. (These are the median salaries in the United States. Professionals might get paid different amounts in your area.)

Obviously, you want to get as much productivity as possible from your staff. You cannot make that happen when you wait until the end of the development process to test your products. When you enter the usability testing phase, you might discover that your developers spent a week adding a feature that no one even wants to use. What a waste!

Early usability testing that happens during the design phase speeds up your process (and shifts more of the responsibility to employees who earn lower salaries). With fully functional prototypes, you might discover that an interaction doesn’t perform as expected. You might learn that most users prefer one layout over another. You might find out that people despise the core concept of your product!

It’s always better to learn these things early in the process. If usability testing shows that you have a terrible concept, throw it out now before you dedicate more money toward it. You can always come up with a better idea.

By creating interactive components in your prototypes with states, conditions, and interactions, you do not need to rely on your developers to create a feature before you test it. 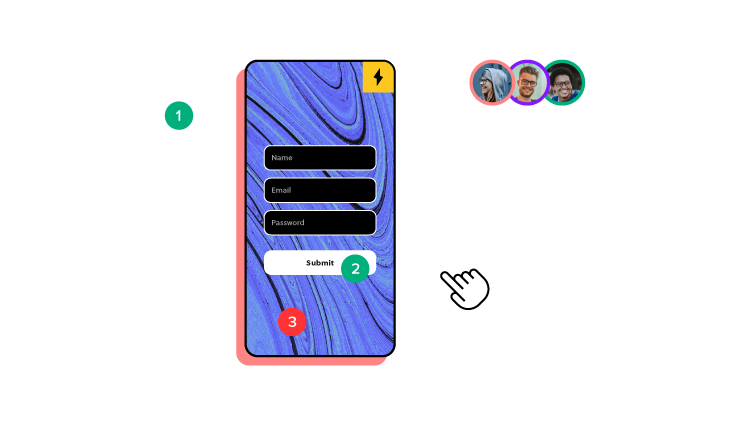 Also, you can send your prototype to anyone. They don’t need UXPin accounts. As long as someone has the right link to your project, they can interact with the prototype and leave comments.

Not sure how to improve product usability? Start with these 5 User Experience Principles to Help Guide Your Work. Nothing’s more effective than doing the job right the first time.

Working prototypes break down barriers between designers and developers

You might worry that your prototype — as functional as it seems — might not perform as precisely as your end product does. Merge eliminates your concerns as each component is fully coded. No, you don’t need to know how to write a single line of code! It’s easy because as a designer you look at the interactive UI and developer looks at the production-ready code of the same component. One element, yet two perspectives.

Merge’s code-based approach to design also means that your developers can create new products from existing components. You already know how the features behave, so you can fit them together in inventive ways and offer your users new tools. Once you have a library of React components or a Storybook, it’s easy to put them together and know how they will interact.

Get started with Merge to test fully functional prototypes

Merge isn’t one of those prototyping tools that only give you an imitation of the final product. You get fully functional prototypes that you can start testing immediately. What’s most important, it takes you 10x faster to build a hi-fi prototype to test out.

Get started with Merge today so you can see how much easier, faster, and less expensive digital products become when you can improve usability testing with prototypes that work just like the final product.